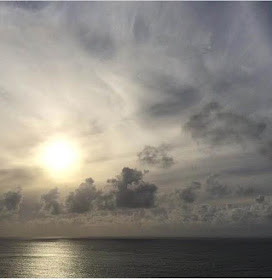 The other day I was told a mind-blowing fact by an expert eleven year old boy.

He dropped this knowledge bomb with the enthusiasm and authority that only eleven-year-olds can, and when I later used Google to verify his knowledge, my mind was blown once more. So, brace yourselves...

Did you know, the mass of the sun constitutes 99.8% of the Solar System's total mass?

So often our engagement with the sun does not recognise how enormously significant it is. I don't do maths, but 99.8%!? That's high.

Maybe it's because we live in Britain- and so the sun is a muted force that lets us see things, a few rays valiantly cutting through the layers of sturdy clouds. We know it's pretty essential for things like life, and making trips to the Med worthwhile, but often we think of the sun as being "lovely"- a welcome guest when we see it, but generally irrelevant to our day to day experience. We don't think of it as constituting 99.8% of the Solar System's mass.

And sometimes, that's how we relate to Jesus too. There, obviously, but lurking somewhere out of sight. Making things a bit better, a bit warmer, a bit clearer- but essentially veiled from sight and behind a whole load of clouds. Clouds of the years of history, clouds of business, of stress, of suffering, or Netflix.

This summer I saw the most stunning sunset I've seen in years. The sky was dull, overcast, hazy- until the sun dipped below the horizon. Suddenly, the heavens exploded with waves of colour; swathes of pinks and purples running in to one another, clouds lit like embers, the dwarfed sea mirroring the vibrancy above it. In time the shades intensified- expanding- surrounding us with a glow of glory.

It was absolutely staggering.

And sometimes, that's how we relate to Jesus. He grips our hearts and we are captivated by the unexpected intensity of his worth, his majesty. We see the wonder of a rugged cross, the majesty in his humility, we exalt in the intricate cohesion of prophecy, of history- all held together, gloriously, in Him. Sometimes we see Jesus like we saw that sunset: chasing away darkness, we feel his comforting warmth, we see him more vibrantly than anything else.

But we don't always see him like that. Often, it tends to be a moment, a swell: the awestruck wonder fades- and we maybe go and get something to eat. It isn't often we think of him as constituting 99.8% of the Solar System, as it were.

But this post is not a rebuke on "why don't we just give him some credit?" (though we should!), but rather a rejoice (if that's okay to noun-ify!) that in many ways, Jesus is like the sun (or rather the sun is like Jesus.)

I find it so reassuring, in times of darkness to know that- whatever the problem- the problem is not with Jesus. In the same way that darkness does not make the sun less than 99.8% of the mass within the Solar System, our darkness does not make Jesus anything less. It is not that he is not enough. We don't need to convince him to be anything we need, or persuade him to be more glorious in any way. He is all over it!

Just like the sun, whatever's going on, He's still there: burning brightly, giving life, healing the wounded, breathing life in to shriveled up shrubs. He is there: reliable, and steadfast, and glorious.

He is brilliant.
He is significant.
He is there. Like the sun is there: massive in significance, always at work, utterly vibrant.

So though we don't see him now, though the darkness lurks oppressively, impressively, destructively- He is still there.

And the darkness will not be impressive forever. Maybe, just now, darkness is all we see. As the psalmist puts it, "darkness is my only friend." (Psalm 88) Maybe we're cold, or bored, or mystified- shrouded in fog, desperate for just a glint of something.

But nonetheless, though we may not see Him now, the problem is not with Jesus.

Nonetheless, He is the light of the world.
Nonetheless, dawn is coming.
And nonetheless, when that dawn comes, there will be no more night. (Revelation 22).
Philippa at 21:47
Share